We spend the hour talking with political historian Thomas Frank about his ground-breaking book about Populism and anti-Populism, The People, No: A Brief History of Anti-Populism.

It’s about the long history of elite distrust of pro-democracy working class/farmer political activism in the U.S. As Frank explains:

The People, No is the story of how much of our modern world we owe to our home-grown democratic movements for reform. It is also a cautionary note for our time, a warning against the pundits who tell us to fear the plain people, to keep to the path of centrist complacency, to let the experts handle our lives and our future.

Writer’s Voice — in depth conversation with writers of all genres, on the air since 2004. Rate us on iTunes,  Amazon Music or wherever you get your podcasts! It really helps others find our show.

There are only a few days left before the most consequential election in American history. Will democracy come to an end if Trump wins? Many fear so, with reason. 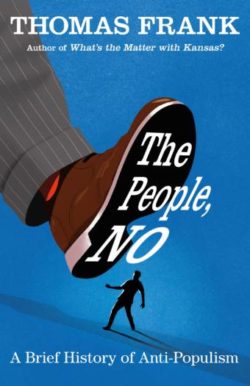 But democracy has been under attack since long before Trump started trying to dismantle it entirely.

After he was elected in 2016, there were many pundits who questioned the value of democracy, scorning Trump as a “populist,” because supposedly the non-college educated white working class masses put him in office. In fact, Trump voters were better off than most Americans, with an average income of $70,000 (about $20,000 over median income at the time.)

In a counterintuitive twist, somehow democracy was accused of leading to populism, and populism was decried as autocratic, illiberal, and, above all, stupid.

But our guest Thomas Frank says that the pundits, academics and Democratic elite who attack populism have got the term all wrong–and they are heirs to a tradition that’s been getting it wrong since the Populist Party became a force in 19th century America.

In fact, the Populists fought for expanding the vote to women; they rejected xenophobia against immigrants; and they built alliances between Black and white workers and farmers. And, far from being stupid, they pushed for policies that succeeding generations adopted as fundamental and needed reforms.

In his book The People, No, Frank takes the reader through the history of populism and its opponents from the beginning down to today. The lesson he draws is that the real story of populism is the story of American democracy itself.

Thomas Frank is the author of nine books, including Listen Liberal, which we spoke with him about in 2017.

READ AN EXCERPT FROM THE PEOPLE, NO