But Joe McCarthy biographer Larry Tye is optimistic. He says: “The lesson of Joe McCarthy and our other demagogues is that they fell even faster than they rose — once America saw through them and reclaimed its better self.“

We talk with Larry Tye about his acclaimed new book, Demagogue: The Life and Long Shadow of Senator Joe McCarthy.

Then, a novel that asks the question: how do we balance the risks of political protest with the consequences, especially when those protests turn violent? Ellen Meeropol tells us about her new novel, Her Sister’s Tattoo.

It’s about two sisters whose lives are marked by the choices they make during an antiwar demonstration in 1968. Meeropol uses history to explore the personal dimension of activism —and the thorny intersection of sibling loyalty and political beliefs. 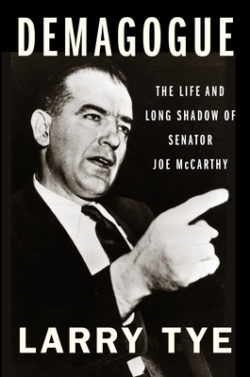 In the long history of American demagogues, never has one man caused so much damage in such a short time as Senator Joseph McCarthy (at least until the current occupant of the White House, Donald Trump.)

From 1950 to 1954, McCarthy destroyed many careers and even entire lives, whipping the nation into a frenzy of paranoia, accusation, loyalty oaths, and terror.

Now, Larry Tye, bestselling biographer of Bobby Kennedy and Satchel Paige, has been able to take an exclusive look at the senator’s records to tell the full story of Joe McCarthy.

In Demagogue: The Life and Long Shadow of Senator Joe McCarthy, Larry Tye draws a direct line from the Wisconsin Senator to Trump, showing how Trump not only uses the McCarthy playbook, but also how McCarthy’s right-hand man Roy Cohn became Donald Trump’s mentor. In his story lies a salient message for our current times.

Larry Tye is the author of eight books, including Bobby Kennedy: The Making of A Liberal Icon, which we spoke with him about here.

Read an excerpt from Demagogue. 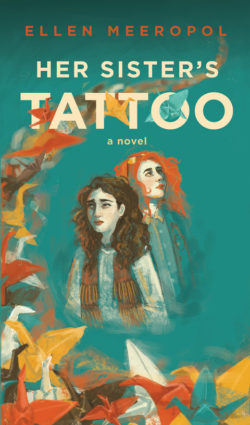 Ellen Meeropol has carved out a very special genre for her fiction writing: she writes novels about leftist political protest and the establishment forces that try to crush it. We’ve spoken with her about two previous novels in this vein, Kinship of Clover and On Hurricane Island.

Her newest novel, Her Sister’s Tattoo, continues the tradition. It tells the story of two sisters whose lives are marked by the choices they make during an antiwar demonstration in 1968. Meeropol uses history to explore the personal dimension of activism —and the thorny intersection of sibling loyalty and political beliefs.

The great Marge Piercy, author of Woman on the Edge of Time, said,

“Her Sister’s Tattoo is an honest and riveting portrait of anti-war activists and the price individuals and families pay for their actions, no matter how just.”