We spend the hour with Howard Mansfield, first talking about his new book, THE HABIT OF TURNING THE WORLD UPSIDE DOWN (Bauhan Press 2018). It’s about how American society treats property rights — and who pays the price. Then, we replay our 2013 interview with him about his book DWELLING IN POSSIBILITY: Searching for the Soul of Shelter. 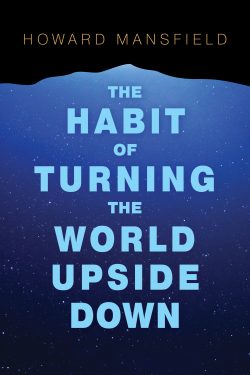 While reporting on citizens fighting natural gas pipelines and transmission towers planned to cut right across their homes, author Howard Mansfield saw the emotional toll of these projects. “They got under the skin,” he writes. “This was about more than kilowatts, power lines, and pipelines. Something in this upheaval felt familiar. I began to realize that I was witnessing an essential American experience: the world turned upside down. And it all turned on one word: property.”

Mansfield’s new book The Habit of Turning the World Upside Down tells the stories of Americans living in a time in which everything is in motion, in which the world will be turned upside down, again and again.

Writing about preservation, architecture and American history, Howard Mansfield has contributed to The New York Times, American Heritage, The Washington Post, Yankee and other publications. He’s the author of numerous books, including In the Memory House and The Bones of the Earth.

Dwelling in Possibility (2013, encore)
Howard Mansfield’s books are grounded in a profound sense of place. They expand the way we see the world around us, considering time, space, landmarks and architecture. In 2013, we spoke with him about his book Dwelling In Possibility: Searching for the Soul of Shelter.