When disaster strikes, will we descend into dystopia — or cooperate? We talk with Cory Doctorow about his new work of speculative fiction, Walkaway (Macmillan). It’s an “optimistic disaster novel” about what motivates humans to do good in the face of civilizational crisis.

Then, De’Andre Harris was assaulted August 12 by white supremacists in Charlottesville, Virginia. We talk with videographer and photojournalist Zach Roberts about his witnessing of the assault. His image of the beating (above) went viral. 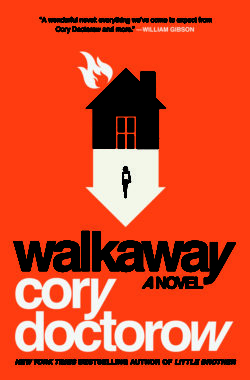 As we confront a century where disasters, environmental and economic alike, threaten civilization, will we devolve into some Hunger Games-like dystopia or will we work together to find creative solutions that can serve us all?

These are issues science fiction often concerns itself with, usually by imagining a dystopian future. But as Cory Doctorow wrote in Wired Magazine, “disasters don’t have to end in dystopias.”

His terrific new novel Walkaway posits a breakaway society in the US that rejects the capitalist economy with its few winners and many losers in favor of a gift economy. Its characters have “walked away” from the notion that abundance is defined by what you have. They define it by doing things for the love of doing them and the love for people around them. And when disaster strikes, this gift economy proves to be the best way for them to survive.

Cory Doctorow is the author of numerous books, including Makers, Little Brother and Down and Out in the Magic Kingdom. He has held policy positions with Creative Commons and the Electronic Frontier Foundation and is a co-editor of the weblog BoingBoing. His science fiction has won numerous awards.

Read an excerpt from Walkaway

Listen to Our Interview with Cory Doctorow about MAKERS

On Saturday August 12, special education teacher De’Andre Harris was viciously assaulted by a group of white nationalist thugs in a parking garage just adjacent to a police station. The police were not there. But Zach Roberts was. 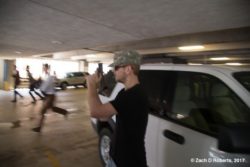 His image of the beating going on in front of his eyes went viral. He also got a shot of one of the thugs aiming a gun at Harris and his friends as they were making their escape. We called him up to find out what he saw and what happened next.

Zach Roberts is a photo journalist and associate producer and videographer for Greg Palast’s film, The Best Democracy Money Can Buy. He also writes for Nation of Change.