Ralph Nader tells us how build a movement that can bridge left and right to promote real democracy. His new book is Breaking Through Power: It’s Easier Than We Think.

Then, Sarah van Gelder of Yes! Magazine tells us why she set out on a 12,000 mile odyssey around America to find models for grassroots action. Her book is The Revolution Where You Live.

On January 21, women and men in the U.S. and around the world came out in the millions to stand up for women’s rights, human rights and democracy. (One expert estimate puts the figure for U.S. participation at more than 1 in every 100 Americans.) 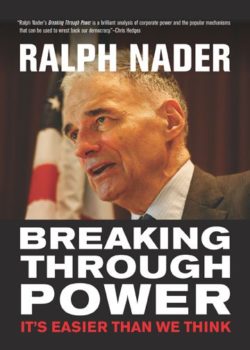 Many observers asked whether it was a flash in the plan or the beginning of a new people’s movement. Since the election, there have been signs that the American people are waking up to defend rights they feel are threatened by the new administration and Republicans in Congress: women’s rights, environmental rights, voting rights, civil rights, workers rights and the rights of immigrants.

Our guests this hour have dedicated their lives to real democracy. Ralph Nader’s activism has been directly credited with the passage of landmark laws for protecting American consumers, including the Clean Water Act, the Freedom of Information Act, the Consumer Product Safety Act, the Foreign Corrupt Practices Act, the Whistleblower Protection Act, and the National Traffic and Motor Vehicle Safety Act — that last one mandated the seat belts that have saved hundreds of thousands of lives.

Nader has been repeatedly named to lists of the “100 Most Influential Americans”, including those published by Life Magazine and Time Magazine. He’s the founder of the pro-democracy organization Public Citizen.

His new book Breaking Through Power: It’s Easier Than We Think is a guide for activists, whether newly minted or experienced, who want to exert the power of the people to move our political system on our behalf.

Read an excerpt from Breaking Through Power 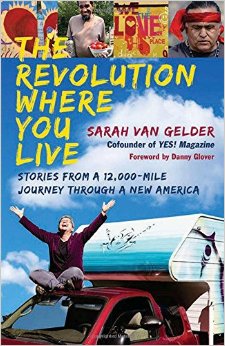 Yes! Magazine is almost unique: a publication with positive stories about change, rather than the steady diet of gloom and doom that was the usual reading fare. Sarah van Gelder, is a cofounder of Yes!

But even someone who has been bringing stories about solutions instead of just problems to the public can get depressed sometimes, looking around that the enormous challenges we face in this world and this country. From economic to environmental meltdowns, the crises are overwhelming.

But her new book, The Revolution Where You Live, is filled with inspiring stories of ordinary Americans working together to confront power, take it back and make their communities better. The issues they confront range from threats to their land and water, workplaces closing down, poor access to healthy and adequate food and housing — and more.

From Native American reservations to the midwestern Rust Belt to the Northeast to the deep South, the Revolution Where You Live has stories that spark ideas and inspire hope.