We talk with Wendell Potter about the book he co-wrote with Nick Penniman, Nation on the Take: How Big Money Corrupts Our Democracy and What We Can Do About It.

Then, we speak with journalist Adam Johnson about the corporate spin on the Wikileaks DNC revelations. His article for the media watch group FAIR is “With DNC Leaks, Former ‘Conspiracy Theory’ Is Now True — and No Big Deal”.

If you love Writers Voice, please go to iTunes or your podcast provider and give us a favorable rating. That way, you can spread the love around! 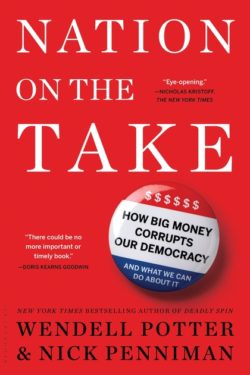 Lobbying is the third largest industry in our nation’s capital behind government and tourism. And it’s not just Washington DC: the system of legalized bribery pervasive in government is as bad — if not worse — in the states. It’s what has turned a our democracy into an oligarchy that functions well only for the 1%.

Instead of working for us, our elected representatives spend most of their time dialing for dollars from wealthy and corporate donors.

A Princeton study that examined more than 1,800 policy initiatives from 1981 to 2002 showed that those favored by the wealthy were enacted, while those favored by most voters, like single payer health care or action on the environment, were ignored. And that was before Citizens United tilted the playing field even more.

Wendell Potter once was a lobbyist for one of the most powerful industries in our economy — the health insurance industry. We last spoke with him in 2012 about his best selling exposé of that industry’s influence peddling, Deadly Spin. Now, he’s teamed up with Nick Penniman on a book that takes the expose of lobbying to a much wider level: Nation On The Take: How Big Money Corrupts Our Democracy and What We Can Do About It.

It has long been obvious to Bernie Sanders’ supporters that their own party apparatus conspired to quash his campaign. But until Wikileaks released the DNC emails, they were called “conspiracy theorists.”

Now that  we know the conspiracy is fact, not theory, it’s been treated as no big deal — just business as usual! — by many in the corporate media. Adam Johnson talks about his piece for the media watch group FAIR, “With DNC Leaks, Former ‘Conspiracy Theory’ Is Now True — and No Big Deal.” It’s about how the pundits spin inconvenient truths they don’t want the public to know.