We spend most of the hour with Paul Ham talking about his new book, HIROSHIMA NAGASAKI: The Real Story of the Atomic Bombings and Their Aftermath. We also listen back to an excerpt from last year’s interview with Naomi Klein about her book, THIS CHANGES EVERYTHING: Capitalism vs The Climate. It’s just out in paperback from Simon and Schuster.

Seventy years ago this week, the U.S. annihilated Hiroshima and Nagasaki in the world’s first and only atomic attack on civilians. Was it necessary to end WWII? 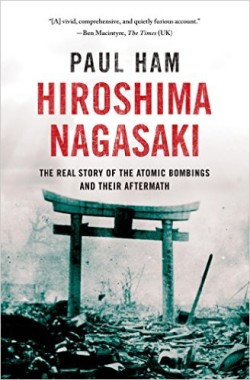 More than a 100,000 men, women and children were killed outright in the nuclear infernos that resulted; hundreds of thousands more died in ensuing years from radiation-induced sickness.

The official story is that the bombing of Hiroshima and Nagasaki were necessary to end the war and avert up to a million of U.S. casualties. But by the summer of 1945, Japan was already defeated, strangled by a U.S. blockade, its Manchurian territory fallen to Soviet troops, its military might spent and its population starving.

The only demand the Japanese government made in return for surrender was that the life of Emperor Hirohito, be spared — a condition fulfilled without fuss by the U.S. after the bombs were dropped and Japan sued for peace.

So why were the bombs dropped on two cities with no military targets to speak of — and without any warning that could have spared civilian lives?

That’s the question historian and journalist Paul Ham examines in his new book, HIROSHIMA NAGASAKI: The Real Story of The Atomic Bombings and Their Aftermath. His detailed narrative draws on a vast trove of documents that have become unclassified in recent decades, as well as interviews with survivors, statesmen and scientists. In it, he paints a compelling picture of the choices facing those who developed and deployed the bomb — and the profound moral failure of the choice they made.

Paul Ham is a historian and the Australia correspondent of The Sunday Times of London, who specializes in the 20th century history of war, politics and diplomacy. In addition to Hiroshima Nagasaki, his books include 1914: The Year the World Ended,  Vietnam: The Australian War and Kokoda.

We re-broadcast an excerpt from our 2014 interview with Naomi Klein about her award-winning book, This Changes Everything: Capitalism vs. The Climate.