Former E.P.A. official E. G. Vallianatos talks about his book, Poison Spring: The Secret History of Pollution and The EPA. And we have a conversation with pioneer environmentalist James “Gus” Speth. He co-founded the Natural Resources Defense Council and founded the World Resources Institute. His new memoir, Angels By The River, looks back on his life in public policy — and also toward the future of the environmental movement. 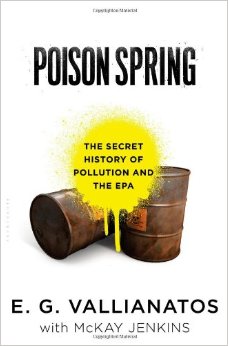 However, the victory began to be compromised almost immediately and gathered real steam just 10 years later, with the election of Ronald Reagan. That ramped up the “regulatory capture” of the EPA by the very corporations it was charged with overseeing.

The tragic story of that capture is told by my guest, E.G. Vallianatos in his powerful new book, Poison Spring.  During his 25 years working for the EPA, he had a front row seat on how corporate interests have been able to corrupt the agency’s ability to do its job.

From herbicides that caused brain defects in infants to the mass death of honeybees that threatens our food supply, Vallianatos tells the stories that illustrate how the EPA has been de-fanged. Administrations from Reagan down through to Obama have given companies like Monsanto the pass to poison our land, our water and ourselves. Poison Spring is the author’s call to action for making the EPA truly independent of political pressure so that it can fulfill its mandate to protect us. 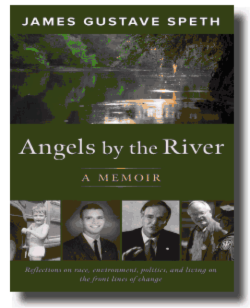 In spite of the revelations in our first segment, the EPA isn’t completely toothless. The agency recently came out with a bold statement that the proposed KXL pipeline would, in fact, intensify global warming.

That clears the way for Obama to nix the pipeline because he has declared that its impact on climate change will weigh heavily on his decision. James “Gus” Speth has been very active in the fight to stop the Keystone XL pipeline. He was arrested for protesting it and spent several days in jail, shackled in leg irons.

But his environmental activism long predates that episode. He was the environmental advisor to Presidents Carter and Clinton, then left government service to found the Natural Resources Defense Council and the World Resources Institute.

But the environmental movement that he did so much to shape has not, Speth says, gone far enough. It needs to greatly expand its scope if it is to effectively carry out its mission. That means nothing less than system change.

Speth’s new memoir Angels By The River  chronicles his own journey from his childhood in the Jim Crow south to his work today in creating a new vision for a just and sustainable society.

Gus Speth is the former dean of the Yale School of Forestry and Environmental Studies, founder and president of the World Resources Institute, and co-founder of the Natural Resources Defense Council. He has also been administrator of the United Nations Development Programme, and chair of the U.S. Council on Environmental Quality in the Carter administration, among other posts.