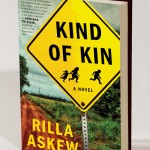 “Your grandpa is a felon,” Aunt Sweet said. “A felon and a Christian. He says he’s a felon because he’s a Christian. Now, what kind of baloney is that?” She jerked the bib strings tight around Mr. Bledsoe’s neck. The old man coughed. “Sorry, Dad.” Aunt Sweet loosened the ties, snatched a baby food jar off the table. She pointed the spoon in her left hand at me like I might be fixing to argue. “Tell him I’ll be up there tomorrow. You tell him I said he’s got a serious amount of explaining to do.” She scooped up a dab of prunes. “Open your mouth, Dad. Carl Albert, hurry up.”

My cousin kept licking the Cheese Whiz out the sides of his sandwich like we had all the time in the world, which we didn’t. Visiting hours start at one, the preacher said, and it was already twelve thirty. I heard a car motor outside and I ran to the front room to look, but it was only old Claudie Ott herding her Chrysler home from church. I squinted across the railroad tracks and the highway toward First Baptist at the far end of the street, but I couldn’t see Brother Oren’s car coming.

“Dustin Lee! Get back in here and wash your hands!”

I did like she said. My aunt’s kind of high-strung at all times but for sure I didn’t want to cross her right then because Uncle Terry got called in to work the night before and he hadn’t got home yet. Aunt Sweet wanted to go with us to see Grandpa but she can’t leave Mr. Bledsoe by himself on account of one time he rolled his wheelchair out the door and straight across the highway to the E-Z Mart and everybody’s afraid he’ll get hit by a BP truck or something. I thought to ask her how come she didn’t make Carl Albert stay home so she could go, but I was afraid she might take the notion for me to be the one to babysit the old man instead. He’s all right but I can’t stand to watch him eat, and anyhow I wasn’t about to take a chance on missing out on seeing my grandpa. When I came back in the kitchen, Aunt Sweet was still trying to get Mr. Bledsoe to open his mouth.

“Aw hell,” she said, and jammed the spoon back in the prunes. I don’t know where she got the name Sweet. It don’t exactly fit her. Anyhow, her real name is Georgia. She reached up over the sink and got down a different jar. “Look here, Dad. Peach cobbler, your favorite.” Mr. Bledsoe isn’t her real dad—my grandpa is. Mr. Bledsoe belongs to Uncle Terry, and he’s not even his dad either. He’s his step-grandfather. “Carl Albert,” Aunt Sweet said, “if you don’t hurry up with that mess I’m going to take it away from you.”

My cousin licked faster. I don’t know how come he can’t eat a sandwich like a normal person but he can’t. I popped him in the back of the head on my way to the sink. He swiped at me and missed, but he didn’t say nothing. He didn’t want to get any more of his mom’s attention. He gave me the look, though, like Don’t worry, Dustbucket, I’ll get you back. We been fighting more since Grandpa and Brother Jesus wound up in jail. That’s Brother Jesus Garcia, from over around Heavener. They locked him up with Grandpa but they took all the other Mexicans someplace else. Aunt Sweet don’t like us calling him Brother Jesus. She says it’s a sacrilege to call somebody after Our Lord and Savior. She don’t even like to hear us call him Brother Hey-soos, and that’s his real name. Carl Albert says Grandpa’s going to get sent to the state pen and there won’t be no place for me to live except in town with them and if he’s got to share his bedroom with a dweeb he’s going to make the dweeb pay. He says they aim to throw the book at Grandpa for transporting illegals and our only hope now is the Supreme Court of America on appeal, and that could take years. I said having Mexicans in your barn don’t mean you’re transporting them—this was in the bedroom that first night when we were getting ready for bed—and Carl Albert said, Use your brain, Dustface, they had to get there some way. I punched him then, and he jumped me and got me down with my arm twisted till I hollered, Okay, okay, I give! But really I didn’t. I aimed to get him back. That pop on the head at the table was just a reminder.

In the kitchen I dried my hands on the dishtowel and told Aunt Sweet I was going to go watch for the preacher. “Holler when he gets here,” she said, pressing the spoon against Mr. Bledsoe’s shut mouth. “Come on, Dad,” she said. “Open up.” I hurried to the front room and squinted along Main Street past the closed video store and the boarded-up bank building with its caved in roof from the straight-line winds last April until I seen Brother Oren’s car backing out of his driveway. I yelled toward the kitchen, “He’s here!”

When the preacher’s rattly old Toyota pulled in, Aunt Sweet was waiting with me on the porch in her pink rodeo boots and her bluest jeans, which goes to show how much she still thought she’d be going to the jail with us when she got dressed that morning. She was shivering because she didn’t have on a jacket. I had on my black hoodie with the hood pulled up, not because I was cold. I just like my hood up. Carl Albert came racing out the front door in just a T-shirt and still zipping his britches. He squeezed past the preacher coming up the steps and ran out to the car so he could grab the shotgun seat. I tried to lag back, but Aunt Sweet told me to go on. She had her arms crossed and her mouth set, so I did like she said. I took the long way around, though, by Mr. Bledsoe’s ramp. Carl Albert leaned up for me to flip the seat forward, and when I climbed past him he knuckled me a good one, but I didn’t do nothing, just settled into the backseat. I was still biding my time.

[From KIND OF KIN by Rilla Askew Copyright © 2013 by Rilla Askew. Reprinted courtesy of ecco, an imprint of HarperCollins Publishers.]