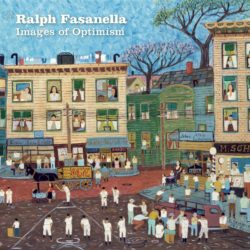 Ralph Fasanella was aptly born on Labor Day 1914 to an Italian immigrant family in New York City. His father was an iceman, his mother was a buttonhole maker.

Fasanella grew up to become a labor organizer. And then he became a painter, taking as his main subject the working people of New York City and the things that defined their lives. His was “art with a social conscience.”

He painted in obscurity for 30 years before being discovered. The painting depicted above, The Great Strike – Lawrence , was given to Congress by a group of unions, where it hung for years in the hearing room for the House Subcommittee on Labor and Education. (When the Republicans took over Congress, it was returned to the A.F.L.-C.I.O.)

The newly released book, Ralph Fasanella: Images of Optimism, contains gorgeous reproductions of Fasanella’s work and text by Marc Fasanella with an introduction by Leslie Umberger.

Some listeners may know that in addition to WV, Francesca co-produces another radio show, Sustainable East End. It airs monthly on WPKN 89.5 out of Bridgeport, CT and serving southern Connecticut an Eastern Long Island.

Earlier this year, Francesca and co-producer Tony Ernst traveled to Marc Fasanella’s house to interview him about the organization he founded and directs, The Ecological Culture Initiative.

The ECI’s mission is to bring sustainability to the community of Hampton Bays, New York, by posing ecological alternatives to destructive land use practices and growth-based development.

We air that interview from Sustainable East End on this episode of Writer’s Voice.