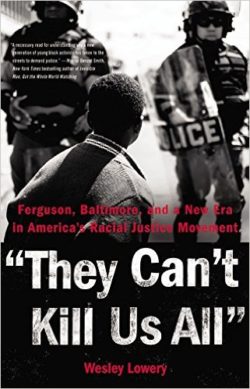 When reporter Wesley Lowery was sent by the Washington Post to cover the unrest that ensued, the last thing he expected was to become part of the story. But that’s what happened when he was forcibly arrested at a McDonald’s — where he had been peacefully eating and writing his story for the day.

Lowery’s experience as young black man in America, as well as his prodigious talent as a writer, make his book They Can’t Kill Us All an invaluable contribution to our understanding of the roots and development of the Black Lives Matter movement.

As much a discourse on the role and record of the media in reporting that movement as on the movement itself, They Can’t Kill Us All moves from the murder of Michael Brown in Ferguson to the murders of 12 year old Tamir Rice in Cleveland and Freddie Gray in Baltimore to show us in vivid prose what Black Lives Matter means for America and why it is so important.

Wesley Lowery is a national reporter for the Washington Post, covering law enforcement, justice, race and politics. In 2014, he was named the National Association of Black Journalists’ “Emerging Journalist of the Year” and was on the team that won the 2016 Pulitzer Prize for reporting on police shootings.

Frederick Clarkson
On January 31, confirmation hearings for Betsy de Vos, Trump’s pick for Education Secretary, made it out of a Senate committee for a hearing before the full Senate.

Her moral fitness for office has been sharply questioned, as a result of serious conflicts of interest, reports she’d plagiarized part of her questionnaire to the Senate and her apparent ignorance of basic issues in education.

But little mention has been made of her extreme religious views on education — views that could translate into policy that erodes the constitutional wall between religion and the state.

Newsflash: The Trump administration would allow religious organizations receiving federal dollars to hire and fire employees based on their beliefs, according to a draft executive order obtained by Reveal from The Center for Investigative Reporting.

Frederick Clarkson has been studying right-wing Christian extremism for many years — and he’s spoken about it before on Writer’s Voice, more than a decade ago. He is a senior fellow at Political Research Associates, a think tank that studies rightwing movements in America.

Clarkson speaks with Writer’s Voice about Betsy de Vos’ plans to promote religious schools with vouchers drawn from taxpayer’s money and the plans of Christian extremists like VP Mike Pence and Republicans in Congress to use “free speech” as a cover for discrimination against LGBTQ people and women.

His latest article for Politico is “A Dystrumpian Vision for LGBTQ People.” He co-founded the group blog Talk To Action and authored Eternal Hostility: The Struggle Between Theocracy and Democracy.