Jonathan Simon talks about the shocking vulnerability of our electronic voting machines and the evidence that that vulnerability is and has been exploited to flip elections. His book is Code Red: Computerized Election Theft and The New American Century.

Then, there is one way to make sure your voting machines aren’t being hacked and it’s being used by one county in New York State. We talk with Board of Elections Commissioner Virginia Martin. She’ll tell us how and why they hand count the vote in her county. 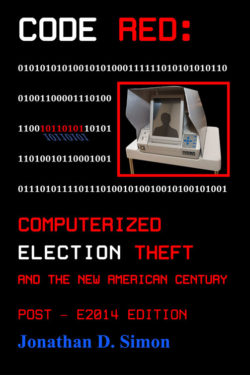 There’s virtual unanimity among the experts who have studied electronic voting that insiders or hackers can change the results of elections without leaving a trace—at least not the kind of trace that any election administrator is likely to find.

These studies have come from institutions like Johns Hopkins, Princeton, University of Michigan, The Brennan Center For Social Justice at NYU, the states of California and Ohio, and even the US Government Accountability Office.

In his book Code Red, Jonathan Simon argues it’s all part of a plan first put into play with the passage of the Help America Vote Act of 2002 — a truly Orwellian name for the legislation if what he says is true: our elections are being rigged.

And why not? The stakes are enormous: nothing less than world power, prestige and wealth. 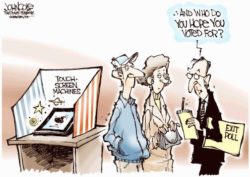 Voting machines are black boxes: designed, run and read by private corporations with proprietary control. The public pays for them, but has no access to them. And most voting machine companies are highly partisan from the right wing of the political spectrum.

Could this be what underlies the massive shift to the right in elections, in spite of the overwhelming unpopularity of Republicans when Americans are polled? That’s the “Code Red” in Jonathan Simon’s title — the massive red shift in American politics he says comes from the rigging of US elections.

Simon is the co-founder and director of the Election Defense Alliance and a member of the Massachusetts Bar. He was a political survey research analyst and became an early advocate for exit polls to detect computerized vote shifting in Election 2004.

If you want to ensure the integrity of election, there is one tried-and-true method: hand counting the ballots. Every ballot. And doing it publicly.

That’s what happens in one New York state county: Columbia County. Francesca met Democratic Board of Elections commissioner Virginia Martin at a panel presentation Martin gave about how elections are run in her county. She says doing a 100% hand count is easy, cost effective — and a surefire way to make sure your voting machines don’t get hacked.