David McConnell discusses his true crime exploration of bias murders of gay men, AMERICAN HONOR KILLINGS: Desire And Rage Among Men. And psychotherapist and author Karen Krett talks about THE DARK SIDE OF HOPE: A Psychological Investigation and Cultural Commentary.

The Supreme Court struck down DOMA last week, opening the way for same sex spouses to receive the same federal benefits opposite sex spouses have. But Justice John Roberts, who voted with the majority, has also said that gays in America have so much political power they don’t need protection from anti-gay bias. 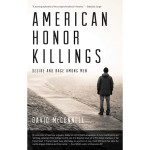 But is that really true? Attacks on gay men increased 70% in NYC this year, like the tragic case of 32 year old Mark Carson who was shot and killed in Greenwich Village. In 2011, more anti-gay murders were committed than ever before in the U.S.

Novelist David McConnell explores the phenomenon of male violence against gay men in his first nonfiction book, AMERICAN HONOR KILLINGS. He spoke to families, friends, and the killers themselves; pored over trial transcripts and plumbed the depths of his own soul as a man and a gay man in America. The result: a fascinating portrait of, as McConnell says in the subtitle, “desire and rage among men.”

Called a journalistic tour de force, AMERICAN HONOR KILLINGS examines a number of high profile cases to come to some surprising conclusions. McConnell says, counter to the common media narrative, most bias crimes against gay men are not committed out of so-called “gay panic” — by men who fear and reject their own homosexuality. Instead, they emerge from disturbing currents deep in our culture, as well as from the damaged childhoods and lives of the men who commit the crimes.

David McConnell is the author of the novels The Silverhearted and The Firebrat. His short fiction and journalism have appeared widely in magazines and anthologies. American Honor Killings was published in March 2013 by Akashic Books.

We’re a culture that is so sold on hope that sometimes it gets positively nauseating, from self-help books touting easy solutions to complex problems to the new psychology of happiness studies scathingly critiqued by social critic Barbara Ehrenrich. It puts one in mind of Dr. Pangloss in Voltaire’s Candide, who believed “this is the best of all possible worlds,” despite all evidence to the contrary.

Hope is useful for keeping us going when the going gets tough. But what if the going is impossible? What if staying stuck on hope means we can’t move on with our lives or understand real problems? That’s the dark side of hope,  Karen Krett says in her book of that title, and subtitled “A Psychological Investigation and Cultural Commentary.” Karen Krett has been a practicing psychotherapist for 25 years. THE DARK SIDE OF HOPE is her first book.